The future of disaster response, as envisioned by the U.S. Defense Advanced Research Projects Agency (DARPA), is in the electro-mechanical hands of robots. Guided by sophisticated computer software, they will be able to carry out complex, dangerous tasks, like disabling a nuclear power plant during a radiation-spewing meltdown, without putting human lives at risk.

The opportunity to play a part in DARPA’s vision for the future came for UCLA engineering professor and renowned robotics expert Dennis Hong last weekend, June 5-6, at the Pomona Fairplex. That’s where a robot he created, THOR-RD, competed against other robots developed by 23 other teams from around the world.

At stake for THOR, Hong and the robot’s 35-member team of postdoctoral, graduate and undergraduate students from UCLA and the University of Pennsylvania were pride points and $3.5 million in prize money to fund future research and development.

“The top robotics researchers in the world compete,” said Hong during the event. “But we’re friends and colleagues. Nobody’s really doing it for the money. The goal is to develop technology that one day will save people’s lives.”

UCLA students first began preparing THOR — a 5-foot-tall, 119-pound humanoid robot — for the challenge last year when Hong joined the faculty at the UCLA Henry Samueli School of Engineering and Applied Science, which recruited him and other experts to build a world-class robotics program.

To reach the finals, THOR outperformed other bots at preliminary trials. But for the final clash of the robotic titans, DARPA was challenging the robots and their human masters to execute even tougher moves — from driving a vehicle to stepping over a pile of rubble without taking a tumble.

The competitors started arriving at the Fairplex early last week, setting up in “the garage,” a hangar-like building where teams worked around the clock, performing maintenance on their robots, testing robot limbs, writing code on banks of laptops set up on portable tables, eating and occasionally napping. Team THOR’s bay was strewn with wires, routers, laptops, power strips, power drills, screwdrivers, duct tape and hardhats bearing the UCLA and UPenn logos. 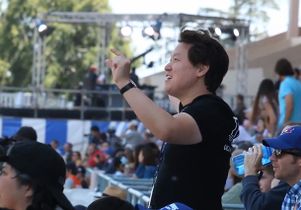 THOR’s team essentially functioned as two units working side-by-side. The UCLA crew primarily handled the mechanical engineering, or physical traits, of the robot. One of their biggest challenges, said Hong, was to find the best design and material for the “gripper” that would enable THOR’s hand to perform fine-motor tasks like turning a doorknob and picking up and operating an electric drill.

The UPenn crew, led by Daniel Lee, professor of engineering and director of the General Robotics Automation, Sensing, Perception Lab, primarily perfected the software that works with the robot’s sensors to see, identify and respond to objects in its surroundings — essential skills for pulling off semi-autonomous tasks like spotting a door across a room or navigating a vehicle along a winding course — all managed from two computers.

“This is a very, very special place right now,” said Hong, as all the teams worked into the wee hours of the morning preparing for Friday and Saturday competition runs. “In the future, all the breakthroughs in humanoid robotics will be coming out from people in this very room.”

The day before the competition, each team was allowed one practice run through the course, set up at the foot of the grandstands at the Fairplex racetrack. During THOR’s practice run, some team members were on the sidelines, watching his every move and assisting him when called upon, while a half-dozen of their cohorts back in the garage communicated with the bot from computers and watched on a simulator that captured THOR’s wireless signals.

The news from the practice run was good and bad. THOR successfully drove a vehicle across a 100-yard course, the first of eight required tasks. But then, while trying to open a door, he fell and broke his arm.

UPenn’s Lee told the disappointed team, “Robots fall…. That’s expected. What’s important is how you react to the fall.”

With no time to waste, the team repaired the arm and set up a plywood simulation of the door so THOR could practice the task overnight.

During day one of the competition, THOR successfully drove the course and then boldly faced the next challenge, opening the dreaded door. THOR pushed the door open, walked to a wheel-like valve on the wall and cranked it shut. And then he tottered and fell. 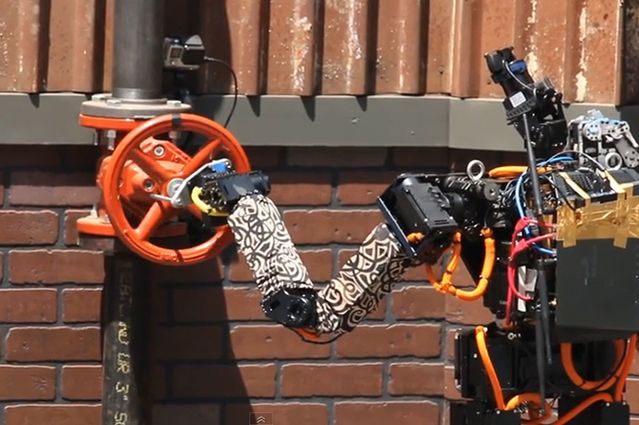 The team worked overnight to fix THOR’s bruises and prep him for another task — pulling a plug from a socket. For the second competition run on Saturday, Hong, seated in the grandstands with thousands of others, watched as THOR drove in, turned the doorknob, opened the door, closed the valve and started toward his next task — the plug and socket. Hong hauled his son Ethan, 7, onto his shoulders, cheering, “Go, Thor. Go!”

THOR stepped toward the socket. Then, just inches away, the bot faltered and fell, knocking him out of the contest.

Benson Ku, a Team THOR member and UCLA senior, watched as THOR was carted back to the garage on the bed of an electric cart. “Sad,” Ku said, “but awesome.”

While Team THOR had hoped to accomplish more, they felt inspired by the opportunity to put their robotics research to work and compete with others, said team member Ming Sun Ahn, a UCLA alumnus who is preparing to do graduate work with Hong next year. In the end, THOR placed No. 13 out of the field of 24, having succeeded at performing three out of the eight tasks. Team KAIST from South Korea and two other teams managed to score a full eight points and walk off with the prize money. But the point spread stretched all the way down to zero, the final score for four of the teams.

“There’s a reason why we can sleep just three or four hours [during the competition] and not really be tired,” Ahn said. “A big part of being able to do that is because we’re all really enjoying it. I’m enjoying it. And I’m planning on making it a career path.”

Hong urged his students to look at the challenge from another vantage point. “You can’t always win, but you can always learn. Everyone who studies and learns from their mistakes goes on to improve, and that is what we are going to do.”

Find more information at the DARPA Robotics Challenge website. Learn more about Hong at his website and the Robotics and Mechanisms Laboratory.

Additional links related to this story: