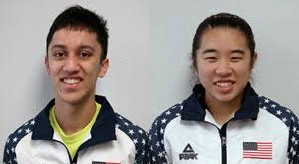 (From the Daily Bruin)

This week, 550 elite American athletes traveled to Gwangju, South Korea, to compete on the world stage at the World University Games.

While some of the athletes play bigger sports like basketball or water polo, many will make their mark in the lesser-known competitions.

UCLA sophomore Stephanie Lam and incoming freshman Ashwin Narkar were among the eight players chosen to represent the U.S. in badminton.

“After (Buasan) went, I was like ‘I want to do this,’ and then I kind of forgot about it,” said Narkar. “But then he called me and asked if I wanted to play, so I applied and was selected for the team.”

However, Buasan wasn’t the biggest influence in his badminton career, Narker said. The freshman’s parents, both badminton players, introduced Narker to the sport when he was 10.

“I’m an only child so my parents kind of spoil me,” Narkar said. “When I was little, my mom always used to drive up to my badminton classes for two hours a day, five days a week.”

Narkar said his parents not only sparked his enthusiasm for badminton, but also mechanical engineering, his chosen major at UCLA, since both of them have also been involved in engineering.

Although engineering may be his career path, Narkar’s future plans are not void of his beloved sport. Working with his friends, the 17-year-old helped to found American Badminton Challenge, a nonprofit which seeks to simultaneously promote the sport and raise money for charities.

In January, the organization held a charity tournament to raise money for the Red Cross and a local badminton magazine. Narkar hopes to continue working with the organization after he graduates.

As the youngest player chosen to represent the U.S., Narkar said he has been able to learn from his older teammates both in playing the sport and getting a glimpse into college life. Lam has been especially insightful since she is a Bruin as well.

“In a way, both (Narkar) and (Lam) are similar,” said the U.S. team manager Ray Ng. “Both of them are initially quiet but their work ethic is great, always trying hard to improve themselves.”

Lam, a second-year molecular, cell and developmental biology student, began playing badminton at the age of 13. She had previously been a tennis player and a swimmer.

“I was very active as a child and would always want to go outside and play sports,” Lam said. “However, once I started playing badminton, I had to dedicate most of my time to training and was unable to continue playing these sports.”

Lam fell in love with the sport and continued playing competitively. She has already played in the World University Badminton Championships. She was able to watch and play against the best badminton players in the world, particularly from Asian badminton powerhouses such as China, Japan, South Korea and Malaysia. Lam said this inspired her to join the U.S. team this summer.

“It’s really a once-in-a-lifetime experience, and I wanted to further improve myself as a player after watching all the different international players at the championships,” said Lam. “I’ve also really wanted to go to Korea, so the games being in Gwangju was a plus.”

Similar to Narkar, Lam would also like to promote the sport. Ultimately she hopes it becomes a recognized NCAA sport.

“I would like to use this event to raise the profile of badminton in the U.S., which currently is still a relatively unknown sport in the States,” Lam said.

The Bruin players have known each other for two years now, and the two trained at the same club in high school.

“I think (Narkar) is a very well-rounded player who excels in all three events and it’s been fun training with him,” Lam said. “Although training for the games has been physically and mentally exhausting, my teammates are always there for me and make it a lot of fun.”

Lam and Narkar will be competing in team events Monday to Wednesday and individual events Friday to Sunday.