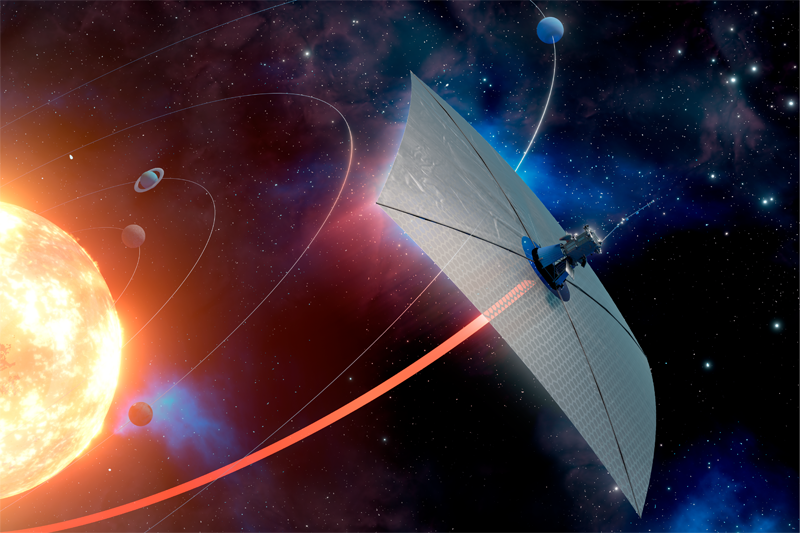 Optica recently published the overview. Davoyan and his co-authors focused on the need for a new generation of photonic materials, which carry and manipulate light, to advance next generation solar sails.

“With proper investments in research and development of optical materials and nanotechnology, solar sail-enabled spacecraft for fast-transit solar-system exploration and interstellar-probe missions could be launched in the next five to 10 years,” said lead author Davoyan, an assistant professor of mechanical and aerospace engineering at the UCLA Samueli School of Engineering. “In this paper, we’ve presented a roadmap that can transform these concepts into reality.”

Solar sails are similar to the sails found on oceangoing ships. Rather than being pushed by wind, however, solar sails are propelled by sunlight reflected off their giant mirrored surfaces. There are distinct advantages for solar sail-propelled spacecraft. The method eliminates the need to carry onboard fuel and power, as is the case for both chemical and electrical rockets. Several spacecraft using solar sails have been launched, with LightSail 2 being the most recent demonstration. However, future solar sail missions would require new materials and methods for control and navigation.

Spacecraft driven by solar sails could potentially go fast enough to reach more than 20 astronomical units — approximately 1.86 billion miles — in one year. At that speed, spacecraft could get to the outer planets of the solar system in several months, instead of taking many years as it does today. For comparison, Voyager 1 took more than 30 years to reach the interstellar medium beyond the edge of the solar system.

Up to now, interstellar objects have been beyond reach. According to Davoyan, solar sail-propelled spacecraft, with its unprecedentedly high velocity, could intercept interstellar asteroids, such as ‘Oumuamua, that travel at 5-6 astronomical units — approximately 500 million miles — per year.

In order to advance current solar sail technology, enhancement is needed on multipurpose materials used to manage a spacecraft’s movements and temperature. For example, sails built out of thin film materials with nanoscale adjustable elements could help control a spacecraft’s speed and direction. At the same time, those materials could help keep the sails cool as the spacecraft approaches the sun for a slingshot maneuver to get beyond the solar system.

The authors also noted that concurrent advancements for solar sail-powered spacecraft would need to be considered for sail-deployment mechanisms, deep-space communications, and power and navigation systems.

NASA recently announced its support for this line of research through the agency’s highly competitive Innovative Advanced Concepts program. Specifically, a solar sail-mission study led by Davoyan has been selected for phase II.

Davoyan’s team, which includes scientists and a number of UCLA mechanical and aerospace engineering undergraduate students, will examine solar-sail requirements for fast transit missions across the solar system and will perform early-stage materials development and testing.

Co-authors of the paper published in Optica include Jeremy Munday of UC Davis; Nelson Tabiryan of BEAM Co. in Orlando, Florida; Grover Swartzlander, Jr. of the Rochester Institute of Technology in New York; and Les Johnson of NASA’s Marshall Space Flight Center in Huntsville, Alabama.