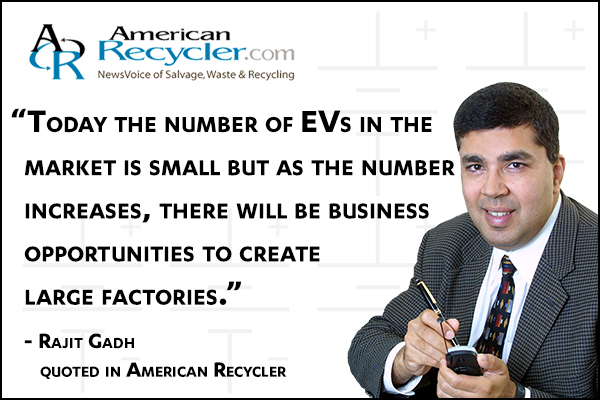 UCLA MAE Professor and SMERC Director Rajit Gadh was quoted in the October 2017 edition of American Recycler, in the article “Recyclability of Electric Vehicle Batteries Scrutinized.”

According to Rajit Gadh, PhD, professor at UCLA’s Henry Samueli School of Engineering and Applied Science, the first generation of batteries for electric vehicles (EVs) were designed with energy density, power density, weight, performance, number of cycles, reliability and safety in mind.

“Often times upwards of half the battery life is still remaining for applications where the technical needs are not that stringent – as they are for an automobile,” Gadh said. “These startups are looking at creative business models for these opportunities. Beyond this, other startups are looking at separating out metals from the batteries for reuse. However, separating out materials after the battery has lived its ‘EV life’ is perhaps not the best use of the resource since these batteries still have a lot of juice left in them for a ‘second life.”

As Gadh explained, plants need to be built for recycling the batteries – whether they are for a secondary market or whether their materials are recycled.

“Today the number of EVs in the market is small but as the number increases, there will be business opportunities to create large factories,” Gadh said. “This would be very much along the lines of Tesla’s Gigafactory that was created by Tesla founder, Elon Musk, when he realized the electric vehicle market is going to grow rapidly and substantially and he would need batteries for his cars.  It does require a visionary to see this new opportunity.”

“The main issue is the battery itself and innovative ideas around the world are aggressively trying to solve this issue,” Gadh said. “Separate from the battery, given that the EV has far less vibration, noise, etc., than an ICE, its overall body and structure should last longer than an ICE vehicle body – making it better for the environment in this respect.”

“The difference now is that California seems to be a contender for leadership in the EV space alongside Detroit with Tesla in northern California and companies such as Faraday Future and Pro Terra in Southern California,” Gadh said. “The resulting technology suppliers and supply chain will have the opportunity to grow very rapidly in California – which undoubtedly would include battery recyclers and reusers.”

“Taking this a step further by recycling the metals within EV batteries such as nickel or lithium would be the next step in making the automobile transportation sector even cleaner,” Gadh said. “There are already tech startups looking into this opportunity, so I believe that the future of recycling of electric vehicle batteries and electric vehicles overall is very exciting.”