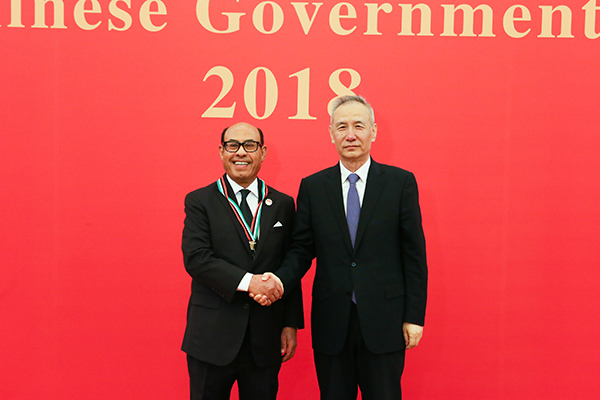 Above: Professor Mohamed Abdou receives the 2018 Friendship Award from Vice Premier Liu He

Distinguished Professor Mohamed Abdou of the University of California – Los Angeles (UCLA) received the 2018 Chinese Government Friendship Award, which is China’s highest award for foreign experts who have made outstanding contributions to the country’s economic and social progress. He received the Award from Vice Premier Liu He in a ceremony on September 29th in the Great Hall of the People. The Chinese Government also held a grand award ceremony in the Great Hall on September 30th to honor the winners of the 2018 Friendship Award. In this ceremony, Premier Li Keqiang expressed his very warm congratulations to the honored experts, fully appreciating their efforts to boost China’s development and to promote China’s friendship with other countries.

The recipients of the 2018 Friendship Award were 50 foreign experts from 21 countries working in various fields that include industry, agriculture, energy, environmental protection, education, science and technology, medical care and public health, culture and sports.

Premier Li Keqiang at the grand award ceremony with the winners of the 2018 Friendship Award.