MAE Ph.D. candidate Dylan Dickstein lands on the cover of the Journal of Applied Physics 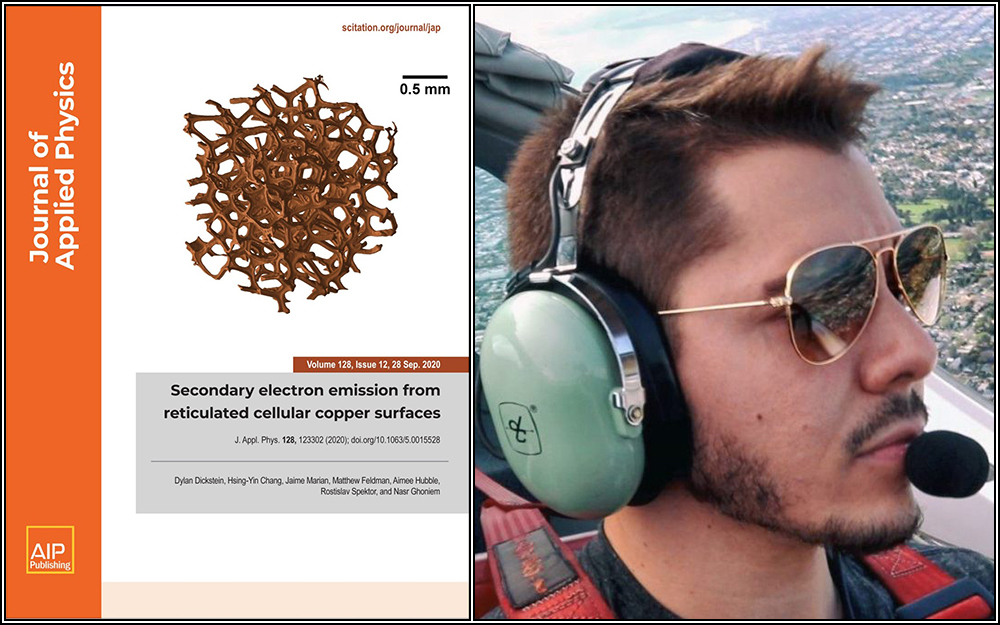 A UCLA research team in the Mechanical and Aerospace Engineering Department has landed themselves on the cover of the Journal of Applied Physics (JAP). Dating back to 1931, JAP is an influential journal which focuses on the physics of modern technology. Under the advisership of Distinguished Professor Nasr Ghoniem, Aerospace Engineering Ph.D. Candidate Dylan Dickstein published his work on secondary electron emission. The seven-member team includes UCLA Materials Science and Engineering Ph.D. graduate Hsing-Yin Chang and her former adviser Professor Jaime Marian.

The team studied the secondary electron yield (SEY) of copper foam to gain insight into the extent of yield suppression by porous structures. Entitled “Secondary Electron Emission from Reticulated Cellular Copper Surfaces” (doi: 10.1063/5.0015528) the paper compares the results of secondary electron measurements taken in the electric propulsion laboratories at The Aerospace Corporation in El Segundo, CA with ray-tracing Monte Carlo simulations. The two methods found good agreement and helped the team conclude the reticulated structures examined caused a 20% reduction in SEY.  Additionally, the team found that the SEY becomes nearly independent of the incident electron energy above 200 eV for steep angles of incidence. According to the paper, “Such phenomena have a direct impact on the lifetime and effectiveness of scanning electron microscopes (SEMs), particle accelerators, plasma TV displays, waveguides, and satellites.”

When asked about his thoughts regarding the article being featured as the cover of the journal Dickstein commented, “It was gratifying enough to have the paper published. Seeing it make the cover was unexpected and an honor.” The Ph.D. candidate went on to share that “the primary goal should be to disseminate your research so someone out there can benefit. It could be a fellow researcher who is able to validate their work by comparing against yours or an engineer who improves their design after gaining insight your publication was able to provide.”

Regarding support Dickstein stated, “Not only was the internal team facilitative and unified in achieving its objectives, but the external support, from both the collaborators and the stakeholders, was key to finishing the project.” The efforts involved in producing this paper were funded by the Air Force Office of Scientific Research as well as the National Science Foundation which provides Dickstein’s graduate fellowship.