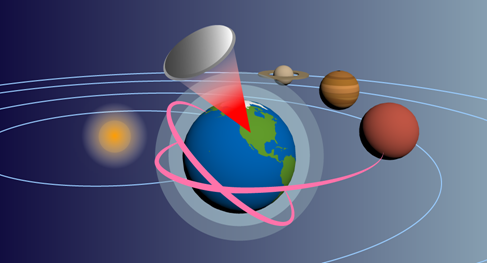 Space exploration can be very costly and slow, tacking years if not decades of flight time. Now in a study led by MAE PhD student Ho-Ting Tung and Professor Artur Davoyan a new concept for fast sailing with the use of lasers was developed.

A paper by the team “Low-Power Laser Sailing for Fast-Transit Space Flight,” was published recently in Nano Letters. In it the team shows that with low power lasers can power specifically designed nanostructured probes to perform complex orbital maneuvers and fast transit missions to outer planets.

Space exploration is of paramount importance to advancing fundamental science and the global economy. However, today’s space missions are limited by existing propulsion technologies. Here, we examine the use of laser-driven light sailing for agile Earth orbital maneuvering and for fast-transit exploration of the solar system and interstellar medium. We show that laser propulsion becomes practical at laser powers ≥100 kW and laser array sizes ∼1 m, which are feasible in the near term. Our analysis indicates that lightweight (1–100 g) wafer-scale (∼10 cm) spacecraft may be propelled by lasers to orbits that are beyond the reach of current systems. We discuss material requirements and photonic designs and introduce new figures of merit. We show that lightsails made of silicon nitride and boron nitride are particularly well suited for the discussed applications. Our architecture may pave the way to ubiquitous Earth orbital networks and fast-transit low-cost missions across the solar system.

The study was partially supported by NASA Innovative Advanced Concepts and Airforce Office of Scientific Research.

The paper was also featured in Nanowerk Spotlight (quoted in part below).

“Our approach makes use of low-power lasers, which are available already today, and novel light sail nanomaterials,” explains Artur Davoyan, an Assistant Professor of Mechanical and Aerospace Engineering at UCLA. “These lasers push small, cell phone sized probes to velocities and destinations that are beyond the reach of current technologies, such as ever bigger chemical rockets being built or state-of-the-art ion engines.”

“We foresee that many mass produced cell-phone size probes equipped with all sorts of nanosensors will be sent to different destinations across the solar system in a very short time,” Davoyan tells Nanowerk. “We envisage that Mars, the outer planets, and potentially habitable moons can be reached within a matter of months, and importantly, many times (for example, planets beyond Saturn have been visited only once so far).”