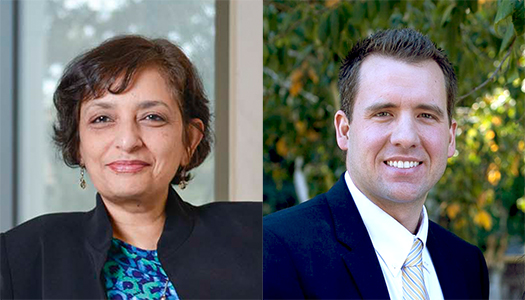 Jayathi Y. Murthy became the seventh dean of the UCLA Henry Samueli School of Engineering and Applied Science on January 1, 2016.

Before joining UCLA Engineering, Murthy was chair of the Department of Mechanical Engineering at the University of Texas at Austin, and held the Ernest Cockrell Jr. Memorial Chair in Engineering. Consistently ranked as one of the top mechanical engineering departments in the country, the department has 66 faculty and approximately 1,500 students.

From 2008 to 2014, Murthy served as the director of the Center for Prediction of Reliability, Integrity and Survivability of Microsystems (PRISM), a $21 million center of excellence supported by the National Nuclear Security Administration (NNSA).

From 1988 to 1998, Murthy worked at New Hampshire-based Fluent, Inc., a developer and vendor of the world’s most widely used computational fluid dynamics software. She led the development of algorithms and software that still form the core the company’s products.

Murthy began her career at Arizona State University, where she was an assistant professor of mechanical and aerospace engineering from 1984 to 1988.

Murthy received a Ph.D. in mechanical engineering from the University of Minnesota, an M.S. from Washington State University and a B. Tech from the Indian Institute of Technology, Kanpur. She is a fellow of the American Society of Mechanical Engineers and the author of more than 280 technical publications. She serves on the editorial boards of Numerical Heat Transfer and the International Journal of Thermal Sciences. She is an editor of the second edition of the Handbook of Numerical Heat Transfer.

Prof. Spearrin’s research focuses on spectroscopy and optical sensors, including laser absorption and fluorescence, with experimental application to advanced propulsion, energy systems, and other dynamic flow fields. Recent projects have included spatially and temporally resolved measurements in supersonic combustion (i.e. scramjet) flows and detonation-based engines, where new performance metrics were developed to understand and advance these systems.  Future propulsion research is aimed toward experimental investigation of systems that operate at supercritical conditions, as is the case for most rockets, and the underlying spectroscopy and kinetics associated with those reacting flows. Dr. Spearrin completed his Ph.D. at Stanford University, working in the High Temperature Gas Dynamics Laboratory. Prior to his academic career, Dr. Spearrin worked for Pratt & Whitney Rocketdyne in Los Angeles as a combustion devices development engineer.  Prof. Spearrin is currently looking for highly motivated students to join his new laboratory at UCLA.