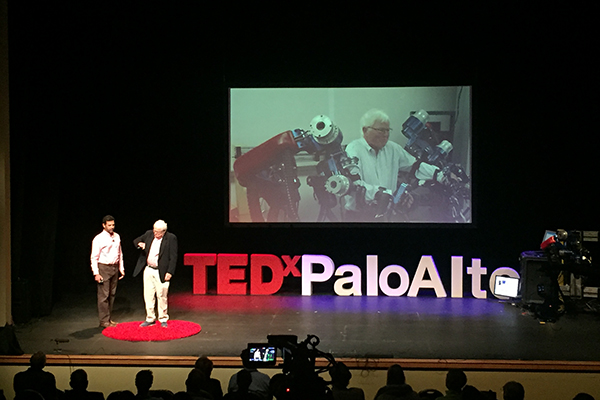 MAE Professor Jacob Rosen delivered his talk entitled “Wear a Robot – Strike Stroke” at TEDx Palo Alto 2018. The talk covered his personal journey in science, exploring principles such as symmetry and redundancy and their application in human body motion, the implication of stroke on the motor control system, and his scientific efforts in developing upper limb exoskeleton systems to recover the motor control of stroke patients using dual arm modes. In these modes, both the arm affected by stroke as well as the arm that was unaffected are involved in the physical therapy, while the wearable exoskeleton system provides assistance as needed – as the patient interacts with virtual objects in virtual worlds. A dual arm physical therapy engages the left and the right hemispheres simultaneously while maximizing brain plasticity as part of the brain’s efforts to recover lost functions. The talk included a patient showing the audience the motor control implications of stroke and the physical disabilities associated with it, following by a demonstration of the dual arm exoskeleton as a system that can be incorporated into the physical therapy following stroke, and offers a paradigm shift in recovering lost motor control functions.