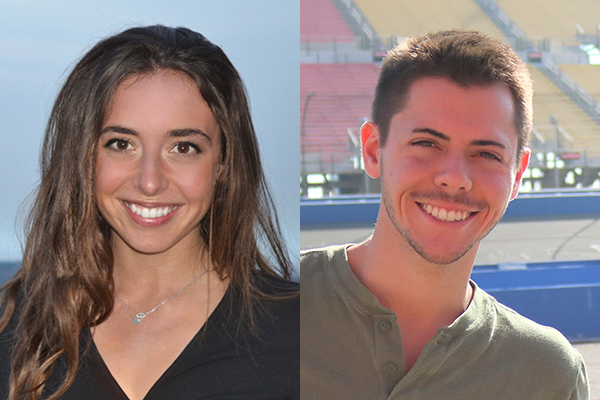 Above: Eva Abramson and Dylan Dickstein.

Eva Abramson seeks to explore how space-based technologies can be harnessed to address the issues we face on Earth. She is originally from the Los Angeles area, and is currently a junior. She studies International Development and Geospatial Information Systems, and has taken additional technical coursework to remain up-to-speed with her engineering teammates.  She is thankful that UCLA has enabled her to combine classes in orbital dynamics and space weather with topics like conflict mediation and intellectual property.

On campus, Abramson is a member of Bruin Consulting, a group that helps clients from start-ups to Fortune 500 companies solve their strategic and operational concerns. Additionally, Abramson is the External Vice President of Bruin Spacecraft Group, which is supported by UCLA MAE. There, she serves as a liaison  between the aerospace community and Bruin Spacecraft Group’s many projects, which include micro-gravity experiments, intercollegiate space-policy debates, and even a rocket payload set to launch aboard Blue Origin’s New Shepard vehicle.  These on-campus opportunities have helped shape her professional interests: she seeks to combine bleeding-edge technologies with the approaches that create a successful operating environment.

Since last summer, Abramson has worked for the Aerospace Corporation, an El Segundo think-tank that advises the United States Air Force (USAF), and particularly the Space and Missile Systems Center (SMC). There, she has explored flexible mechanisms for the Department of Defense (DoD) and other civil agencies to benefit from the surge of start-ups in the space industry. This cohort is often referred to as ‘Space 2.0’ or ‘NewSpace.’

The Matthew Isakowitz Fellowship recognized Abramson’s passion for space-based start-ups and paired her with Lockheed Martin Ventures (LMV). LMV is the venture capital arm of Lockheed Martin, which makes investments in early and growth-stage companies who fall within strategic areas of interest. Some groups supported by LMV include Terran Orbital and Rocket Lab. Abramson is excited to enter the venture world, where she will help assess the technology validity and market readiness of new entrants to the space sector. Albeit in a different environment, this opportunity will allow her to build upon her interest in the new applications of space-based technology.

Prior to setting course on a Ph.D. from UCLA, Dickstein received his B.S. in June of 2016 in aerospace engineering and a minor in mathematics from Cal Poly San Luis Obispo. Most recently, he completed the M.S. portion of his UCLA aerospace engineering graduate studies in December of 2017. Since enrolling at UCLA in September 2016, Dickstein has researched erosion from high heat flux in microengineered materials for deep space exploration under the guidance of Distinguished Professor Nasr Ghoniem. Dickstein commented on his experience as a UCLA aerospace engineering graduate student. “Every day I am posed with vital questions about satellite longevity and methods to increase our interplanetary potential. And where better to seek the answers than at UCLA. The Air Force, Boeing, and NASA are in our backyard. International partnerships are fundamental to the university as well.”

Dickstein shall join SpaceX’s Dragon Propulsion team where his research with ablative surfaces will aid his daily work on the capsule’s Draco and SuperDraco engines. Slated to start launching at the end of 2018, Crew Dragon will carry astronauts as part of NASA’s Commercial Crew Program. Dickstein explains, “Placing humans atop an ignited rocket requires immense confidence in the vehicle. The research I have performed in Professor Ghoniem’s group has prepared me well to rationally gain such confidence.”

Having spent two summers at ULA (United Launch Alliance) – the joint venture between Boeing and Lockheed Martin – with the first position at the Denver headquarters and the second at the Cape Canaveral launch site, along with summers at The Aerospace Corporation and Virgin Galactic, Dickstein has been exposed to many parts of the industry. In summer 2015, he joined the ULA 3D-printing structures group. Among his main tasks were to qualify Ultem-9085 for cryogenic flight use and redesign the Atlas V secondary payload carrier to be 3D-printed. His design dramatically lowered the procurement cost and lead time. Additionally, the former part had over 100 components; now it is printed as one piece. Dickstein is proud to have designed and analyzed ULA’s first flight-critical 3D-printed object to space. Following his work on the Atlas V launch vehicle, Dickstein has put effort and capability toward the Delta IV and LauncherOne rocket programs.

Like many kids, Dickstein dreamed of going into space when he grew up. But where he differed from his cosmos-minded classmates is that the dream did not fade with age. Instead, it grew brighter and more tangible. Dickstein’s calling came on his fifth birthday when he unwrapped a beginner Estes model rocket kit. Though his 5-year-old self could not imagine the path to becoming an aerospace engineer, he was perceptive to become so passionate since his dreams have not changed in 20 years. He still desires to be an astronaut every single day. Likewise, he enjoys helping others fulfill their cosmic dreams. With NASA’s astronaut acceptance rate at 0.066%, commercial space is the most promising avenue for the masses to explore the final frontier. His wish to help lay the first pieces of lunar or Martian settlements among fellow commercial crewmates provides a motivating force which keeps him reaching for the stars. “The Isakowitz’s strength in starting this fellowship program is incredibly touching,” Dickstein disclosed. “Now more than ever, I am eager to push the boundary of commercial space and it is a privilege to represent the MIFP in this endeavor.”