Dylan Dickstein: Flight is in the blood for AE Ph.D. student and aspiring astronaut 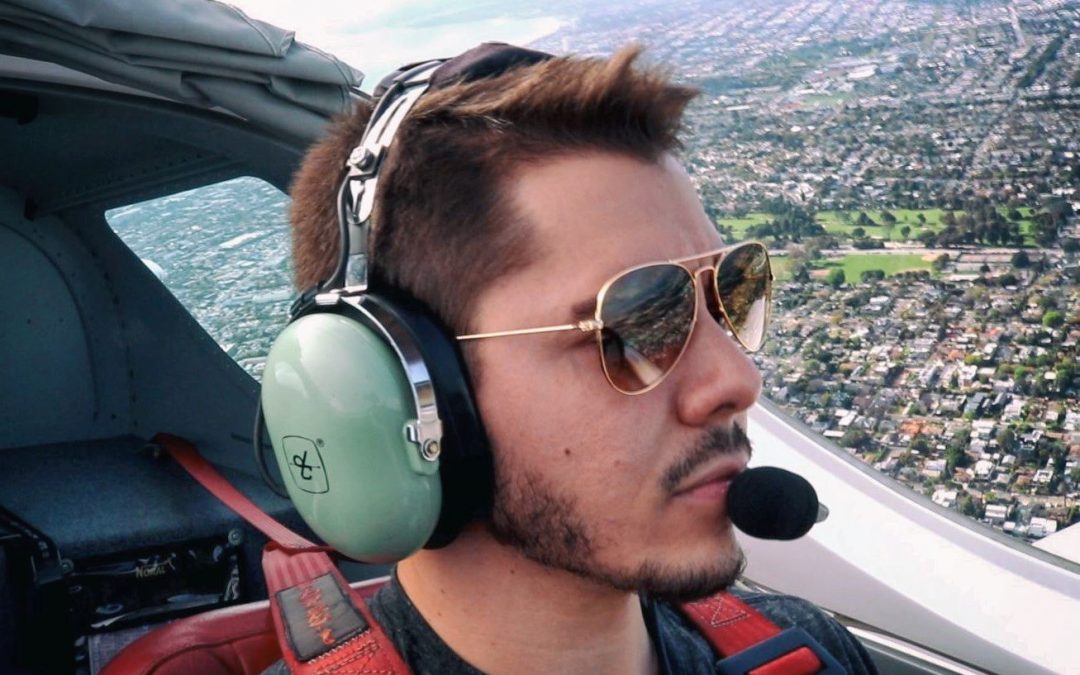 Unsurprisingly, the majority of recently selected astronauts have extensive flying experience. Whether learned in the armed forces or at a privately-owned flight school, understanding how to translate human mechanics to those of an aircraft is an essential skill for those in the business of working and living in space. Dylan Dickstein, a third year UCLA AE Ph.D. student and aspiring astronaut, has been honing such skills as he works toward his private pilot license (PPL). The budding rocket scientist has recently passed a major PPL milestone as he successfully flew his first solo flight on March 21st at Santa Monica Airport.

Dickstein knew he wanted to attain his PPL before acquiring his Ph.D., but was motivated to start this school year with the encouragement of Astronaut CJ Sturckow. Through connections made during his internship at Virgin Galactic and The Matthew Isakowitz Fellowship, Dickstein met CJ at Tehachapi Municipal Airport with the plan to co-pilot a glider. “It was my first time ever behind the controls of an aircraft and who better to learn from than the former commander of Space Shuttle Atlantis and Discovery. He was aware of my aspirations and put me to the test. Passing each of his challenges during the glider flight that summer day near the Mojave Desert gave CJ and myself an inkling that flight may be in my blood.” 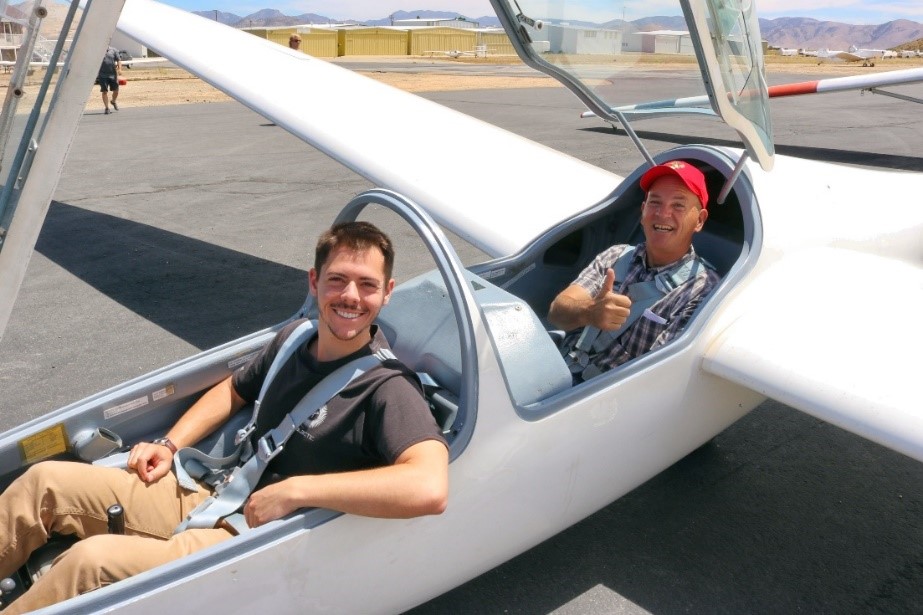 Dickstein began accruing flight hours at the Santa Monica Flyers pilot training facility in October of this past year while also balancing his other extracurriculars and keeping focused on his research. Dickstein explained that his lessons have been as frequent as twice a week, but highly dependent on the forecast and plane availability. “As a student pilot, I need to take into account specific weather restrictions defined by the FAA. In Southern California, especially in an El Niño year like this one, low clouds and high winds limit the number of days I am able to fly.” 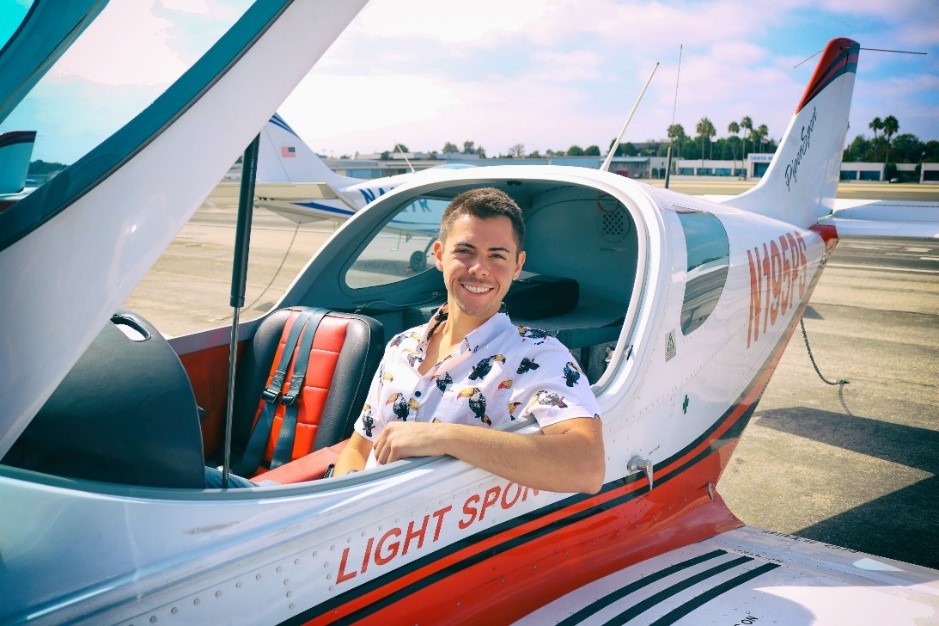 The process of obtaining a PPL commences with the study of plane aerodynamics, instrumentation, as well as FAA and airspace rules while applying it to basic flight maneuvers including climbs, descents, turns, and stalls. Once these concepts are understood, then the student typically practices takeoff and landing techniques while multitasking radio calls and other in-plane operations. The aforementioned training is entirely performed with a certified flight instructor (CFI) in the passenger seat. The CFI gradually speaks less during flights as the student pilot learns to be more autonomous until the student is able to navigate, maneuver, and communicate on his or her own. This is the point when a student is ready for their first solo flight. Dickstein recalls this part of his training. “My instructor would say to me, ‘Alright, I want you to take off from Runway 21, do a lap in the pattern, and land me on the same runway. I am going to be silent the whole way.’”

Dickstein clarified that the initial solo flight is the first of several he will need to complete before he is granted his PPL. In contrast to a driver’s license, in which the student legally drives alone only after receiving the license, a student pilot’s first solo flight is approximately the halfway point. While Dickstein is still a couple of months out from finishing his training, a successful first solo is a major step toward completion and a once-in-a-lifetime experience that pilots tend to carry with them for the rest of their lives.

For Dickstein, this incredible opportunity came one day before his 25th birthday. At 1PM on March 21st, he arrived at Santa Monica Airport with his girlfriend there for support from the ground. He did four practice laps around the airport with his CFI Darrell Robinson to ensure he was ready. Each lap involved taking off, circling around to the other end of the runway, and landing while simultaneously communicating with Air Traffic Control from the cockpit radio. The trial run was a success. The two pilots returned inside to sign paperwork and, for the first time, Dickstein walked back to the tarmac to enter the plane by himself.

In line with the national standard, the first solo flight would be three laps around the airport. The rest of this momentous event is captured on video. Dickstein comments on his disposition during the event. “You can see my confidence build throughout the flight. Especially after the first takeoff, my training to that point had me feeling calm and in control of the situation. The views were gorgeous. The ocean is mesmerizing from a small plane. And doing it alone felt freeing and empowering.” 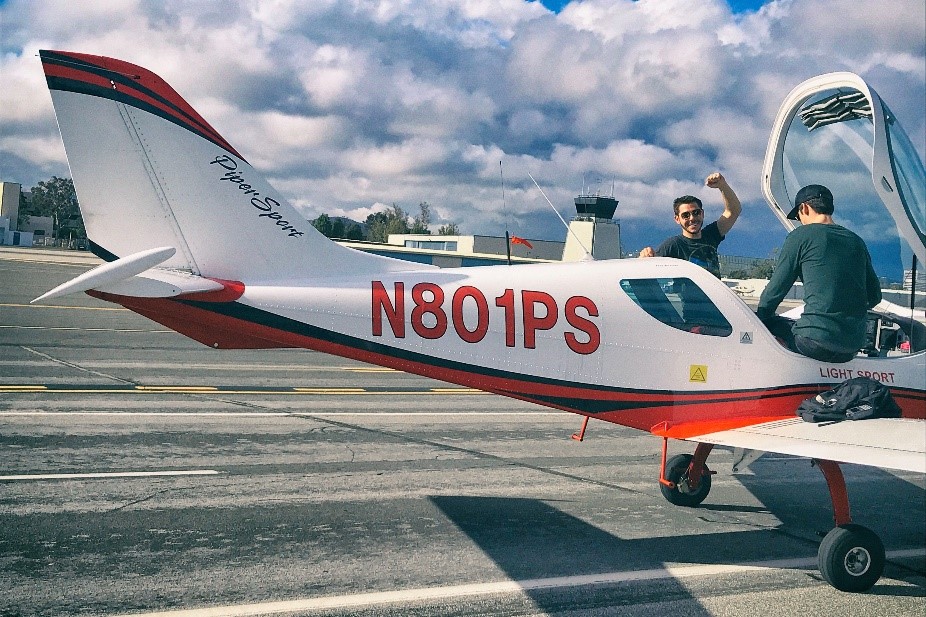 Dickstein, unbeknownst to him before he started taking flight lessons, is not the only pilot in his family. “About a month into my training, my grandmother told me that her late grandmother, Greta Michelle Karpfen was a pilot following World War I. It was astonishing news. She showed me the photo for proof, and I was taken aback.”

Karpfen was a Junker F-13 pilot and holds the distinction of being among the first 200 female pilots in the United States. She lived in Czechoslovakia and is photographed in neighboring Austria. Karpfen flew during the infancy of aviation, only about 15 years after the Wright Brothers’ first flight. Moreover, her plane was developed in Germany at the end of the war and is the world’s first all-metal transport craft. “Of course I would have loved to talk to her about aviation,” he said readily. “We would have bonded over that immediately. I would have had so many questions and would have wanted to hear all the stories.”

With his recent discovery that flight is in his blood, Dickstein feels more motivated than ever to complete his PPL. “Greta clearly had an explorer’s spirit. Aviation was barely understood in the 20s and 30s, and for women the concept of becoming a pilot was nearly unheard-of. She is a pacesetter, a calculated risk taker, and an incredible role model. If she were here today, I bet she would have her sights on space. I bet she and I would have similar career aspirations.” 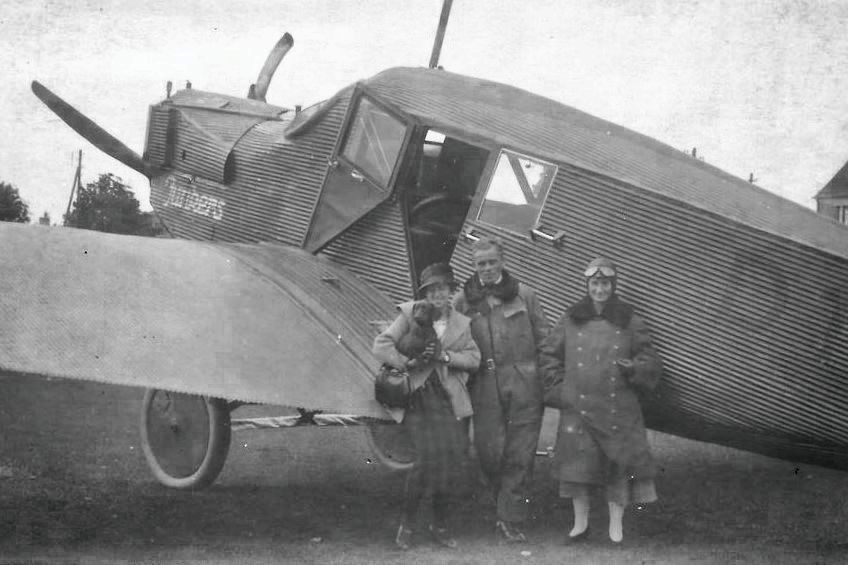 Greta Karpfen (right) with her co-pilot, passenger, and a dog in front of a Junker F-13.

As Dickstein continues to progress toward his PPL, he looks back on his first solo and is reminded of how his engineering background contributed to his successful flight. “Learning how structures work in correspondence with aerothermodynamics in undergrad and during graduate school here at UCLA has made all the difference in my progress,” Dickstein concludes. “It has also given me a greater appreciation for what is actually happening when I need to apply backpressure in a steep turn or watch out for jet turbulence in the proximity of a 747.”

Dickstein acknowledges that getting a PPL is not for everyone. “Each person has a unique situation when it comes to risk, finances, and schedule. But for those that have an interest in aviation and can stomach these factors, getting outside your comfort zone and into a cockpit of a single-engine plane is a life-changing experience that will afford you the confidence to reach even higher.”