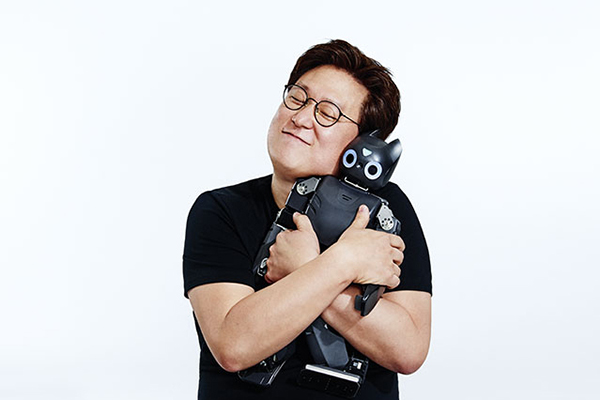 They are all shapes and sizes, with all numbers of legs. They can put out fires on ships, shimmy up construction sites to do dangerous inspections, safely traverse battlefields and enter power plants to plug radiation leaks.

Oh, and they play soccer, too. One tiny one even break-dances.

These are just some of the products of the endlessly creative mind of UCLA’s Dennis Hong, director of the legendary RoMeLa (Robotics and Mechanisms Laboratory), and his intrepid band of robot-loving graduate and undergraduate students.

When he was 7 years old, Hong’s parents took him to see “Star Wars: A New Hope.” He was mesmerized by the movie’s iconic robots, R2-D2 and C-3PO. On the ride home, Hong announced that he was going to be a robot scientist. That sense of wonder and joy is still with him, and it’s a big reason why fledgling roboticists flock to RoMeLa. Quick to laugh, enthusiastic and a mesmerizing spinner of stories, Hong is one of the most famous and most written-about roboticists in the world.

He’s also as much artist as scientist. This is an engineer who says he always carries a notebook and pencil with him because inspiration can come from “everywhere and everything.”

When Hong was a graduate student, he took a study break in a park. “On the bench in front of me was a lady braiding her daughter’s hair,” he remembers. “Of course, I’d seen braided hair before, but that was the first time I had seen the process of braiding. Three strands of hair, one goes between two. So I sketched the process. Ten years later, the U.S. Navy had a call for a proposal; they were interested in a new type of mobility robot. So I opened my sketchbook and saw the hair-braiding process. Suddenly, the strands of hair started to look like legs.”

Out of that was born the three-legged STriDER (Self-excited Tripedal Dynamic Experimental Robot), which can change directions, is more stable than other walking robots and is easier to implement.

This kind of imagination, not surprisingly, draws hordes of talented would-be robot engineers from around the world. Hong’s RoMeLa team includes 20 graduate and 18 undergraduate students, building and testing their creations with a passion and exuberance only the truly dedicated can muster.

RoMeLa grad student Mike Bradley, who came to UCLA from Connecticut to pursue his robot dreams, explains that “Dr. Hong always preaches [that] if you’re not having fun, you’re not using all of your potential.”

Hong’s method of choosing who gains access to his magic kingdom is as iconoclastic as his approach to engineering robots. “I do not like 4.0 students,” he declares. “I like 3.75 students. If you want a 4.0, you need to focus only on getting good grades. The 3.75 students — those are the ones who are creative. They’re hands-on, they like building things, and they really like solving problems.”

Since 2011, Tsu-Chin Tsao, chair of the mechanical and aerospace engineering department, and his team at the UCLA Henry Samueli School of Engineering and Applied Science have brought onboard three robotics superstars to build one of the great robotics programs in the world. Besides Hong, UCLA has welcomed Jacob Rosen, whose specialty is surgical robots, and Veronica Santos, who leads the Biomechatronics Lab, which works on artificial hands.

Adding to the momentum in robotics are the achievements of other UCLA engineering faculty, including Tsao’s work on dynamic systems and controls; Stefano Soatto and Demetri Terzopoulos’ work on how computers “see” the world around them; and Judea Pearl and Richard Korf’s pioneering work on artificial intelligence.

“At UCLA Engineering, we are fortunate to have leaders in all the disciplines — mechanical engineering, computer vision, artificial intelligence and so forth — required for a world-class robotics program,” says Jayathi Murthy, dean of the engineering school. “The field is advancing at lightning speed, and our students and faculty are at the forefront.”

On the third floor of UCLA’s Engineering Building IV, Hong sits cross-legged in front of a seamless backdrop for a photo shoot, cradling a ridiculously adorable, 18-inch-tall robot called DARwin–OP (officially, Dynamic Anthropomorphic Robot with Intelligence–Open Platform, but everyone just calls it “DARwin”). It is a teaching and research robot created by Hong as open-source technology.

Thousands of DARwins are in use around the world, helping to teach robotic locomotion and autonomous actions, and generally tinkered with by roboticists everywhere. The little robot that break-dances is DARwin’s 10-inch sibling, DARwin Mini, which is controlled by an app.

Then there is the big boy on the block: humanoid robot THOR (for Tactical Hazardous Operations Robot). Just under 5 feet tall, THOR is an imposing metal presence designed for disaster-relief scenarios, such as going into an irradiated nuclear plant.

Hong is often asked which of his robots is his favorite. He responds by paraphrasing a saying: “If you bite all 10 fingers, they all hurt.”

The creation he’s most proud of isn’t really a robot at all. It’s a car that can be driven by the blind. “It’s not an autonomous car,” Hong explains. “This is a car that a visually impaired person can make active decisions in and drive.”

The blind-driver car is the first of its kind in the world. A lot of firsts come out of a Dennis Hong team, some humanoid (Before he came to UCLA, Hong created the very first autonomous humanoid robot in the U.S.), some employing novel robot engineering ideas, and many that look nothing like the robots envisioned by Isaac Asimov: the snake robot that can climb structures at construction sites. The low-cost prosthetic hand that uses compressed air. Chemically actuated soft robots. And, of course, STriDER, among many others.

RoMeLa may be Disneyland for roboticists, but its leader insists that, all the fun notwithstanding, practical makes perfect.

“The more I study and research, the more I realize how far we are from the science-fiction robots — Rosie from ‘The Jetsons,’ C-3PO from ‘Star Wars’ and all the scary ‘Terminator’ robots,” concludes Hong. “Only when it becomes a research program and finds its application does [a robot] idea become valuable. … If you look at all our robots, it’s technology that will help society and make people happy, give them independence and freedom. That’s what we do.”