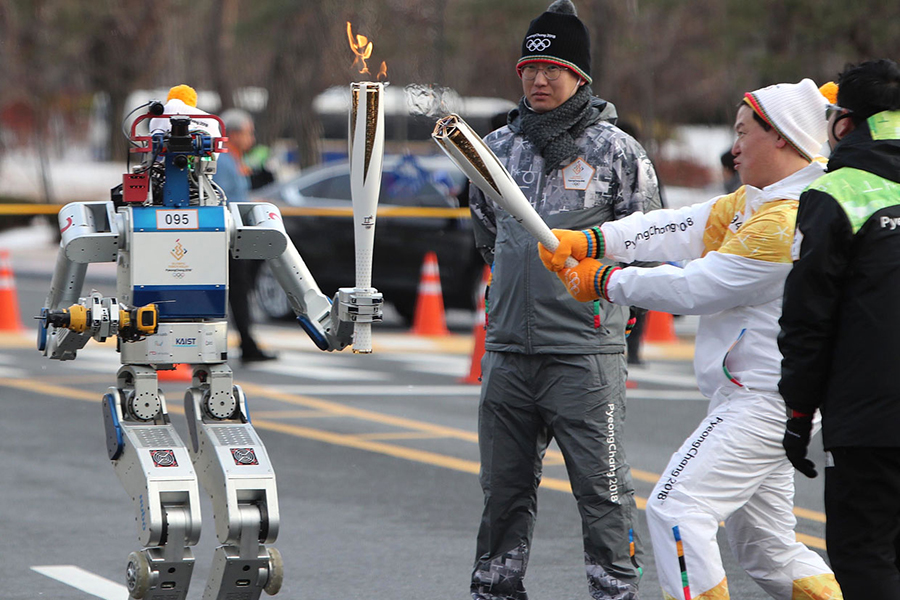 The 2018 Winter Olympics in Pyeongchang, South Korea, start Feb. 9 and Dennis Hong, professor of mechanical and aerospace engineering at UCLA, played a part in the build-up to the competition.

Hong, an internationally renowned roboticist who leads the Robotics and Mechanisms Laboratory, known as RoMeLa, is especially well-known in South Korea for his robot designs. Hong was born in Los Angeles to Korean parents, and spent much of his childhood in South Korea.

In December, he was one of 7,500 participants in the traditional Olympic torch relay that went through and around the host country for more than 1,200 miles. After his short run, he passed the flame to a robot from a lab designed by a Korean university.

Hong emailed with Matthew Chin of the UCLA Henry Samueli  School of Engineering and Applied Science about the experience.

What was the crowd like along the torch route?

Despite the cold, it was a festive atmosphere with people dancing and running, following behind me. Especially at the moment when the fire from my torch ignited the torch in the robot’s hand, the crowd went wild! This was the first time a robot was used in a torch relay. It was a historic moment. Prometheus gave fire to humans, human gives fire to robot.

News reports have said that robots will be used throughout the Winter Olympic venues in all kinds of jobs. What are some of the things they will do?

You will see many different robots being used for various tasks including cleaning robots sweeping the floor, massive mural-painting robots creating images on the wall, security robots patrolling the ground, mobile robots serving as information kiosks, and more. This will be an interesting venue to see what robots can and cannot do for humans today. But one good thing about being cold is, most likely the hard-working robots will not overheat.  😉

You, your students and your robots have participated in a sports competition called “RoboCup.” Can you tell us more about the competition’s goals? And relatedly, is there a winter Olympic sport in which robots might have difficulties excelling in the near future?

The official goal of RoboCup is to have a team of autonomous humanoid robots play a game of soccer against the human World Cup champions and win by the year 2050. We are the five-time world champions in RoboCup and planning to show the world something new and spectacular in RoboCup 2019.

But for a winter Olympic sport? I would say maybe figure skating. Figure skating is not just about techniques and performance, but there is that important artistic human aspect to it, which makes it difficult for robots to mimic.

However, before we attempt our robots doing a “quadruple toe loop,” we need to make sure our robots won’t do an “infinite loop.”

[Editor’s note: Hong explained to us lay people that “infinite loop” is a term used to describe a bug in a computer program that makes the code repeat indefinitely.]

Los Angeles has the Summer Olympics in 2028, could we see a RoMeLa robot or two in the torch relay or perhaps in the competition itself at some point in the future?

You bet! However rest assured that our robots won’t have illegal “performance enhancing components.” We would make it a fair game against the other robots. (Or perhaps other humans?)