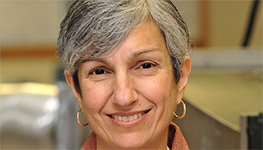 A member of the UCLA faculty since 1982, Ann is professor of mechanical and aerospace engineering at the Henry Samueli School of Engineering and Applied Science (HSSEAS). She heads UCLA’s Energy and Propulsion Research Laboratory and is the director of the Collaborative Center for Aerospace Sciences, a joint venture of the Air Force Research Laboratory and UCLA. Professor Karagozian is the current parliamentarian for the UCLA Academic Senate and was chair of the Senate during the 2010-11 academic year. At HSSEAS, she was chair of the faculty of engineering (1999-2001) and a member of the Faculty Executive Committee (2012-15). For the Department of Mechanical and Aerospace Engineering, she served as vice chair for industrial relations (2008-10 and 2011-12) and vice chair for undergraduate affairs (1993-94).

Outside UCLA, Professor Karagozian is a member of the board of trustees of the Institute for Defense Analyses and the American University of Armenia. She currently serves as councilor on the executive committee for the Division of Fluid Dynamics of the American Physical Society and previously served as division chair. She was a member of the U.S. Air Force Scientific Advisory Board for thirteen years, serving as the board’s vice chair from 2005 to 2009 and the chair of numerous technical studies. Professor Karagozian has also served on committees for NASA, the U.S. National Committee on Theoretical and Applied Mathematics, and the National Research Council, among others, and she has been a technical consultant for the U.S. Air Force, Sandia National Laboratories and other organizations in the national security arena. She is an alumna of and current mentor for the Defense Science Study Group, which is sponsored by the Defense Advanced Research Projects Agency and directed by the Institute for Defense Analyses. Professor Karagozian has published more than 150 technical articles and chapters, and she has been an associate editor of the AIAA Journal (2002-05) and the Journal of Propulsion and Power (1996-98).