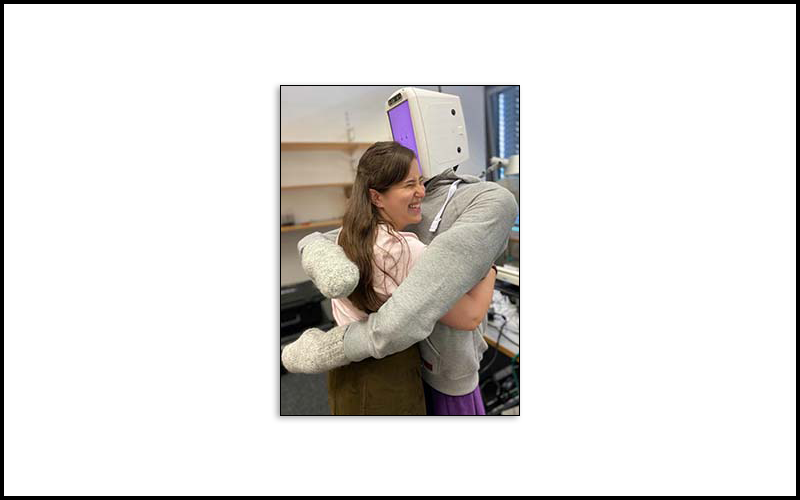 Alexis Block, a mechanical engineering postdoctoral research fellow at the UCLA Samueli School of Engineering, has been awarded an Otto Hahn Medal from Germany’s Max Planck Society to support her research in human-robot interaction.

Each year, the nonprofit premier research organization awards up to 30 medals to outstanding young scientists and researchers across several fields for their scholarly achievements, along with €7,500 (approximately $7,809) for each awardee to support their research.

Block was honored “for her fundamental and innovative research in the field of human-robot interaction through the creation and evaluation of intelligent hugging robots.” The society will officially award the medals at its annual conference in Berlin in June.

Aptly named “HuggieBot,” the robot was designed to give people hugs. Block used a depth-sensing camera, computer vision and torque sensors to adjust the robot to the height, speed and size of an approaching person, respectively. To make the experience more akin to human interactions, Block developed a novel inflatable sensing torso called the “HuggieChest,” which simultaneously softens the robot and senses user contacts on the robot’s back. She also created a detection and classification algorithm that enabled the robot to recognize intra-hug gestures (holds, rubs, pats and squeezes). A separate behavioral algorithm allows the robot to respond accordingly to these gestures in real-time instead of simply reciprocating an embrace.

In a five-group user study, Block compared the participants’ emotional and physiological response to receiving a hug after experiencing a stressful situation. Some users received a hug from HuggieBot, while others got an embrace from a friendly stranger or received no hugs at all. She found that the feelings experienced by individuals who received the hugs from the robot were similar to those who were hugged by friendly humans. Overall, users responded quite positively to “HuggieBot.” Her research has been featured in major news programs and publications around the world, including The New York Times, Entrepreneur,  The Times (U.K.) and twice in IEEE Spectrum. Most recently, Block presented a hands-on demonstration at the EuroHaptics Conference in Germany where she won first place for the Best Demo Award.

Block is a member of the UCLA Biomechatronics Laboratory, which is directed by Veronica Santos, a professor of mechanical engineering and the school’s associate dean for equity, diversity and inclusion (EDI) and faculty affairs.

In 2021, Block received her doctoral degree in science from ETH Zürich in Zürich, Switzerland. She was part of a joint program called the Max Planck ETH Center for Learning Systems, where she was advised by Katherine Kuchenbecker, who directs the Haptic Intelligence Department of the Max Planck Institute for Intelligent Systems in Stuttgart, Germany; Otmar Hilliges, who directs ETH’s Advanced Interactive Technologies Lab at ETH; and Roger Gassert, who directs the Rehabilitation Lab at ETH.

Block was chosen as a 2021 Computing Innovation Fellow by the Computing Research Association and the Computing Community Consortium. The fellows program sponsors Block’s two-year research appointment at UCLA Samueli.

Dannela Lagrimas contributed to this story.