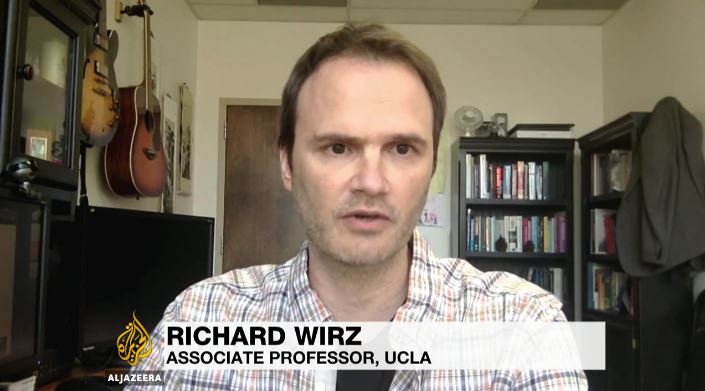 SpaceX recently reused and recovered its Falcon 9 booster on March 31, 2017. Richard Wirz, UCLA Associate Professor of Mechanical & Aerospace Engineering and Director of the Plasma & Space Propulsion Laboratory, was interviewed before and after the launch by the LA Times, LinkedIn, and Al Jazeera.  Links for the articles and video interviews are given below.

During the interviews, Prof. Wirz expressed that successful relaunch is important to the overall space community and the potential to bring launch costs down for future missions. In the LA Times and LinkedIn interviews, Prof. Wirz explained that both NASA and SpaceX had a big role in where we are today with launch technology. For example, decades ago, NASA paved the way for this accomplishment by successfully reusing the Space Shuttle Main Engines (SSMEs) many times in what was considered an “absolute engineering marvel” at the time.

It is often not realized that the three rocket engines affixed to the back NASA’s Space Shuttle Orbiter were reused many times for launch. SpaceX has now further advanced the technology in the Falcon 9 first stage booster by landing the entire system vertically on a drone ship, instead of using the aerodynamic landing of the Space Shuttle Orbiter. SpaceX hopes that its reuse of the first stage booster will lead to cost savings on the order of 30%.

Overall, this accomplishment is an impressive combination of government entities like NASA demonstrating launch engine reuse followed by commercial entities like SpaceX developing cost-effective (and exciting) ways to realize the benefit of reusing launch vehicles.