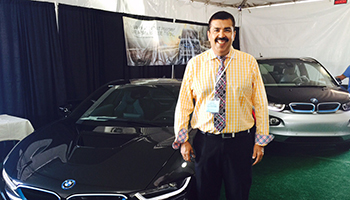 The full article is here: http://argonautnews.com/green-greener-gone/

The quote is as follows:

When it comes to the future of green transportation, “infrastructure is probably the most critical point,” says Gadh, who is partnering with the city to maximize the availability and efficiency of electric vehicle charging locations.

About two and a half years ago, Gadh started measuring how much energy electric vehicle owners were using and at what time of day. That data is going into a new study to help optimize EV charger energy output to avoid taxing the power grid during peak demand hours, he says.

The first study “convinced me there is going to be a shortage of capacity, and now there is — utilization is going up,” Gadh says. “What we’re asking is: Can you schedule the energy flow into that vehicle in such a way that it’s going to be friendly for the building? If everybody is plugging in at 8 a.m., there’s a peak in consumption, and that’s not good.”

Additionally, Prof. Gadh gave a talk at the AltCar Expo on Friday September 18, 2015.