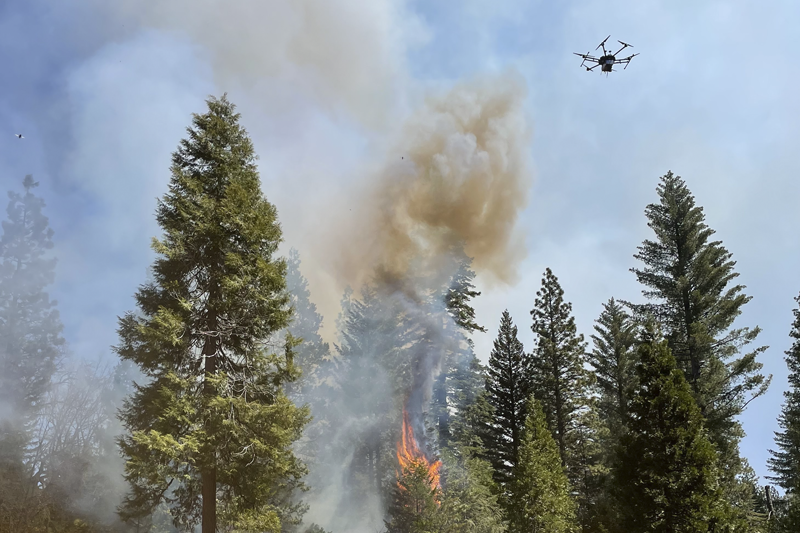 As California and other states continue to battle extreme heat this fire season, Kevin Schwarm, who is pursuing a Ph.D. at the UCLA Samueli School of Engineering, has been fighting fire with fire alongside other researchers at Blodgett Forest in Northern California.

When controlled properly, the so-called prescribed burns — fires that are intentionally set to clear out vegetation that otherwise could end up fueling larger, more catastrophic fires — can play a key role in maintaining the health of a forest. They help prevent the kinds of wildfires that have wiped out homes and caused devastating losses of lives across California in recent years.

While setting fire to the forest may seem counterintuitive to the goal of preventing wildfires, it draws inspiration from Native American practices of setting controlled fires to improve the habitats for deer and other game animals.

Since the Gold Rush, however, the amount of plant life in forests in California has proliferated. While this growth is ostensibly good for the health of the forests, the extra vegetation actually increases the risk of extreme wildfires as it provides large amounts of fuel.

Located about 142 miles east of UC Berkeley on the western slope of the central Sierra Nevada, the 4,400-acre Blodgett Forest Research Station has been a living laboratory since 1933. In April, Rob York, an assistant Cooperative Extension specialist and adjunct associate professor of forestry at UC Berkeley, directed a field campaign involving four days of controlled burns. Scientists and forestry experts from other universities, including UCLA and UC Riverside, joined in the effort to reduce wildfire risk.

Working with engineers from OptoKnowledge, Schwarm was a part of several research teams in charge of measuring the emissions of the prescribed burns. They monitored the emissions using a drone that features on-board, optical sensors that can measure levels of airborne carbon monoxide and carbon dioxide. The team also used the data to create aerial maps that correlate the emissions with the fires, as well as other ground and air measurements.

Schwarm, whose doctoral research focuses on optical diagnostics for combustion systems and harsh environments, was responsible for monitoring the data collection, working with the optical sensor equipment and guiding the drone pilots during the tests.

“The objective was to capture as much information as possible on the emissions of these fires and also to relate those to the burned vegetation that was inventoried beforehand,” said Schwarm, who works in the lab of Mitchell Spearrin, a professor of mechanical and aerospace engineering at UCLA Samueli. “We are hoping that the results of this field campaign will help to further our understanding of wildfire combustion science, the role of wildfires in our local and global climate, and to help us develop more efficient wildfire management strategies.”

A Maine native who loves the outdoors, Schwarm was initially interested in research involving internal combustion engines when he first visited UCLA in 2017 as a prospective graduate student. After meeting Spearrin and learning about his research on laser diagnostics and combustion systems, Schwarm was intrigued and decided to join Spearrin’s research group that fall.

Last fall, Spearrin introduced Schwarm to the multicampus wildfire project. “I found it a very exciting opportunity to use our expertise in combustion diagnostics to play a role in enhancing our understanding of both wildfires and climate change, which could lead to better methods for managing these grave issues,” Schwarm said.

According to Schwarm, the preliminary results from emissions data collected during the field campaign indicate that the drone sensor was very effective in capturing the multi-dimensional gradients of emissions in the fire plumes.

The team has been able to create three-dimensional spatial maps of the emissions concentrations, tracking how they change over time. This finding provides the researchers with insight into how fires behave, such as where the boundaries of the fire are and where new ignition sites emerge.

“This is very exciting as a new sensor capability to provide a deeper level of information for a wide range of applications in wildfire science and management, and we are currently working with the other researchers involved in the burns to place that information into context,” Schwarm said. “This was the first full-scale, real-world test for our drone sensor, and it will serve as a strong foundation for future deployment and expansion of our methods.”

Sara Hubbard contributed to this story.