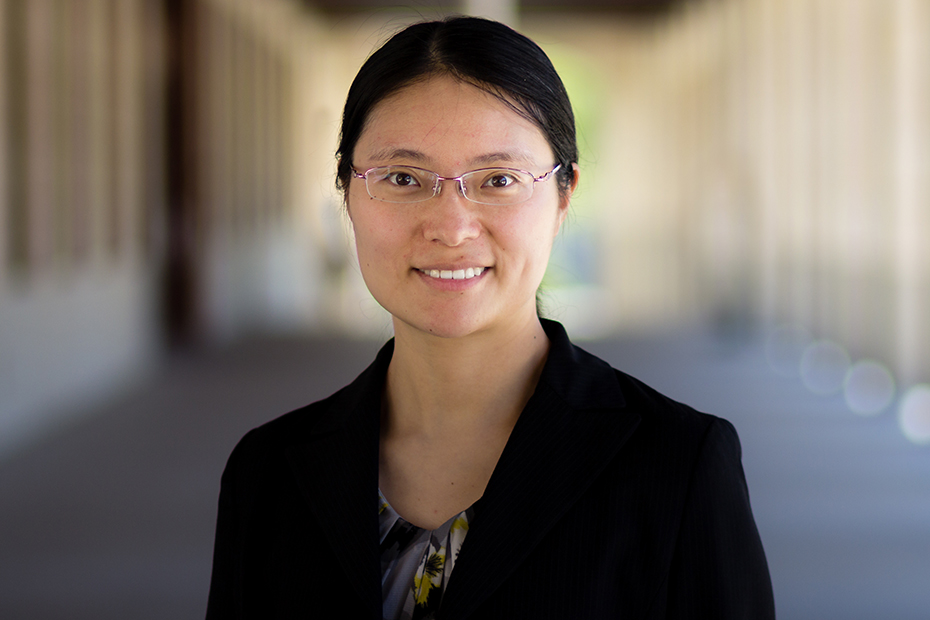 In the Disney animated film “Big Hero 6,” the character Baymax is a loveable, squishy robot that resembles the Michelin Man and is programmed to be a sidekick and protector of the main character Hiro Hamada, a teen robotics engineer. Baymax is filled with air, which makes him exceptionally huggable and a hit with kids and adults alike.

According to UCLA’s Lihua Jin, a real-life robot like Baymax would be a feat of soft materials mechanical engineering, which is one of her areas of study. Jin joined UCLA in 2016 as an assistant professor of mechanical and aerospace engineering in Henry Samueli School of Engineering and Applied Science, where she researches the mechanics of soft materials as well as the behavior of stimuli-responsive materials, soft robotics, nanomechanics and multiscale modeling.

Jin, who serves on the executive committee for the UCLA Institute for Digital Research and Education, grew up in China, and whereas her parents were discouraged from going to college, she was pushed to pursue higher education and was the first in her family to graduate from university. She recalled the advice from one of her high school teachers, who helped her develop her learning process — persistently and continually forming relevant questions — and told her that the precursor to success is hours of both smart and hard work.

Jin earned her bachelor’s and master’s degrees from Fudan University, one of China’s most prestigious institutions. With a natural affinity for math that began in childhood, Jin studied mechanical engineering as a graduate student, although, her passion for the field was sparked during her undergraduate sophomore year when she researched shape memory alloys and liquid crystal elastomers. These smart and solid materials can retain their original shape after being bent by responding to stimuli like water, heat or light.

Applied outside the lab, stimuli-responsive materials can help launch compacted satellites that unfold in space once sunlight hits their panels. Other applications include the use of soft robotics in factories when sorting fragile products like fruits; for example, a robotic arm in manufacturing can’t be made of metal when handling tomatoes or strawberries. Instead, it ought to be made out of fabric that can apply different amounts of pressure depending on the object by pumping itself with more or less air — a Baymax-adjacent robot, perhaps.

By the time Jin was a senior, she knew that she wanted to pursue a doctorate in the United States. So, after completing her master’s degree, she attended Harvard University where she earned her Ph.D. in mechanical engineering and continued her research as a postdoc at Stanford University. Jin has conducted extensive research into hydrogels, which are highly aquatic materials similar to Jell-O. She said, theoretically, hydrogels could be used in medicine: a doctor, for instance, could implant a hydrogel into a patient that could slowly release doses of medication. She won the American Society of Mechanical Engineers — Applied Mechanics Division’s 2016 Haythornthwaite Young Investigator Award for her work involving photo-responsive hydrogels, which respond to light by swelling or deswelling.

“In order to push our field forward, it really needs effort from many people,” Jin said. “What we try to do, is to identify new questions — questions people have not answered before — then try to develop new materials and understand the behaviors of those materials.”

Jin’s interests don’t stop with hydrogels. She is interested in self-healing materials, like a type of rubber that can bond itself back together after being cut or ripped. She’s also excited about the possibilities unlocked by flexible and stretchable electronics. Here, Jin’s research in how instability and fracture affect soft materials comes into play. As illustrated in her published diagram, when soft materials are bent, deformation can occur in the form of wrinkling, creasing, period doubling and ridging. This essential knowledge can help in the creation of wearable technology, such as electronic tattoos that can mimic the movement of skin while also measuring a body’s electrical activity.

“I know what I’m doing is more of the fundamentals,” Jin said. “I won’t claim that some material tomorrow could have a specific application, but I hope that those fundamentals can really push the field forward.”

However fictional it may seem at first, it’s too enticing not to imagine a world where one can take their phone out of their pocket and stretch it out to the size of a newspaper or a book. We still have awhile before that idea is a reality, but Jin’s research involving the mechanical fundamentals of soft materials as well as flexible and stretchable electronics is taking us a step closer to achieving it.

By Cesar J. Saldana. This story was first published at the Institute for Digital Research and Education on Nov. 13. It was also carried at the UCLA Newsroom.