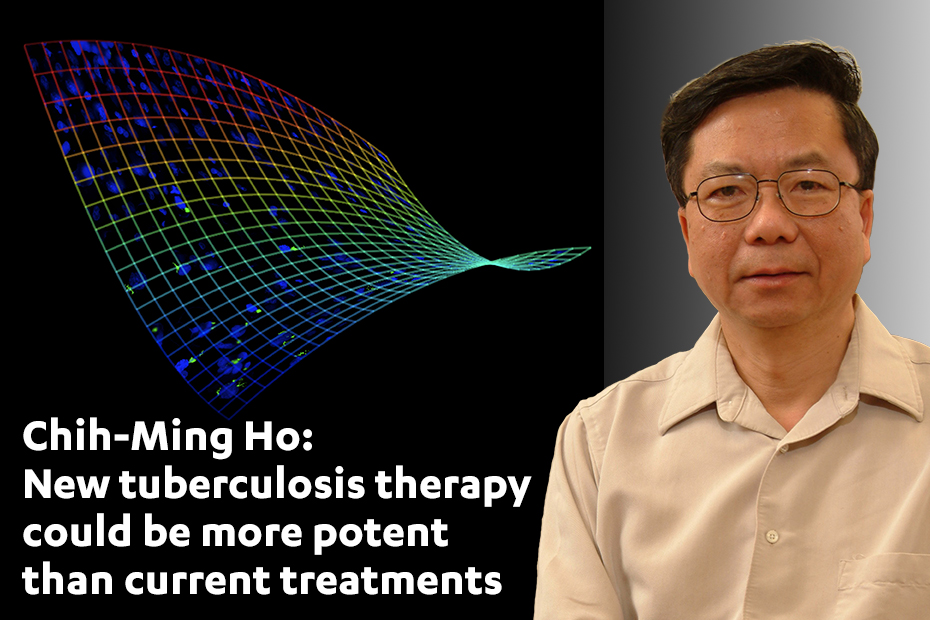 Taking a new approach toward tuberculosis therapy, a UCLA-led research team has devised a potential drug regimen that could cut the treatment time by up to 75 percent, while simultaneously reducing the risk that patients could develop drug-resistant TB.

To identify the regimen, the researchers launched a systematic search for an optimal drug treatment using the Parabolic Response Surface Platform, a data analysis method that identifies which drug combinations work synergistically — that is, with individual drugs working together in a way that is more potent than the sum of their individual potencies.

The study, published in the peer-reviewed journal Nature Communications, is the first to use the platform to identify more effective TB drug regimens and one of the first to focus on a communicable disease.

TB is one of the world’s deadliest diseases, killing more people than any other disease caused by a single infectious organism. Worldwide, about 10 million people develop active TB each year and about 1.5 million people die of the disease, with India, Indonesia, China, Nigeria, Pakistan and South Africa accounting for 60 percent of the total, according to the World Health Organization. The United States saw 9,557 cases in 2015 and, according to the most recent data available, 493 deaths from the disease in 2014. More than 2 billion people have latent infections of the disease-causing bacterium, Mycobacterium tuberculosis, meaning they could ultimately develop active disease.

The current standard for treating TB is a four-drug regimen that has been in use since the 1980s. It was developed through trial and error, with physicians adding or substituting one drug at a time to existing regimens, rather than through a systematic search for synergistic drugs.

The regimen is unusually onerous, requiring six to eight months of therapy, said Dr. Marcus Horwitz, Distinguished Professor of Medicine and Microbiology, Immunology & Molecular Genetics at the David Geffen School of Medicine at UCLA and the study’s senior author.

“The lengthy course increases the likelihood of drug toxicity and often leads to poor patient adherence to the drug regimens, which in turn prompts the emergence of drug-resistant TB,” he said. “Drug-resistant TB, which requires up to two years to treat with current regimens, is difficult to treat and carries a high fatality rate.”

The PRS technology can be applied to any disease and has been used in oncology, infectious diseases, immunosuppression and other areas in both the lab and the clinic, said Chih-Ming Ho, Distinguished Research Professor of Mechanical and Aerospace Engineering at the UCLA Henry Samueli School of Engineering and Applied Science, and principal investigator of this study.

In a previous study, the researchers assessed the effectiveness of about 500 combinations of drugs and doses using a cell culture model. That enabled them to identify several highly synergistic three- and four-drug regimens that would likely be more potent than the standard regimen used to treat TB.

In the current study, the researchers first used the parabolic response surface approach to determine the optimal drug doses in mice for each of four drugs in two combinations. They then tested those combinations — PRS Regimens I and II — in mice infected with a highly virulent strain of M. tuberculosis. The PRS I and II regimens killed TB bacteria in the lungs and cured the mice up to four times faster than the standard regimen. To verify whether the animals were cured, treatment was halted after various treatment periods, and when a three-month waiting time elapsed, confirmation was made that the mice had no TB bacteria in their lungs.

If the new regimens are as successful in treating TB in humans as they were in mice, the much more effective of the two regimens, PRS Regimen II, made up of the drugs clofazimine, bedaquiline, ethambutol and pyrazinamide, would reduce treatment time by 75 percent — from the six to eight months required under the standard regimen to about six weeks to two months.

“As a result, patients are more likely to adhere to the drug regimen, suffer less drug toxicity, and be less likely to develop drug-resistant TB,” Horwitz said. “The PRS regimens are also suitable for treating most cases of drug-resistant TB because they do not contain the two drugs to which people with the drug-resistant disease typically develop resistance. These cases are anticipated to be treatable as rapidly as drug-sensitive cases with the PRS regimens,” he added.

The next step is to test the drug combinations in humans. A pilot study of PRS Regimen I has already begun; this regimen consists of generic drugs only, which was a requirement for this particular study. Preliminary results indicate that four months of treating drug-sensitive TB with this regimen would be at least as effective as six months of treatment with the standard regimen. In addition, in laboratory studies, the researchers are using the PRS analysis against a larger number of TB drugs, including experimental drugs not yet approved for human use, to try to identify even more potent regimens.

Several of the authors are inventors on patents filed by UCLA covering the technology.

The study was supported by a sub-grant from Shanghai Jiao Tong University, a grantee of the Bill & Melinda Gates Foundation.